A couple of observations about the sexual harassment allegations against Cain.

1. If this is the result of a leak by one of Cain's rivals the most likely candidate is another GOP'er. Getting it out now is of zero use to Obama, who can't even be sure that Cain will be his opponent in the general election.
2. The hope of Cain's enemies has to have been that his notoriously disorganized campaign would spin apart when the first scandal hit but
3. If Cain can emerge from this still standing he'll have gained tremendously. In a perverse way these allegations could end up helping Cain at the national level because they keep him in the spotlight. If he survives it will be by strength of character rather than political spin simply because his organization is so rudimentary and unpolished that spin is beyond them.
4. Don't forget that far worse allegations came out about Clinton in 1992 and he still survived to take the Democratic nomination.

Finally, check out the video of Cain singing at the National Press Club. In a lifetime of watching politics this has got to be one of the most unusual things I've ever seen. But what really struck me was two things: First, the CSPAN cameraman doing a perfect slow zoom out while Cain sings. And the second being the fact that when he was done the audience (largely journalists) stoop up and cheered.

Well, the Dead Island trailer is tearing up the internet, and rightfully so. It's a genuine work of art and what it accomplishes in only three minutes is nothing short of miraculous. I have to admit that by the time I got to the end of the trailer I had the wind taken out of me.

Now, based solely on that trailer, a game which has by all appearances been in development Hell for four years has been given new life. What's ironic is that as a general rule trailers have very little to do with the actual game or movie they're advertising. Observers who think that this may herald some new found maturity in gaming are probably wrong. The game developer is Techland in Poland, the studio which produced the trailer is Axis Animation in Scotland. Pity the poor Poles who now have to come up with a game worthy of the hype and their own trailer. There's a more than even chance that the game itself will suck and the only thing people will remember about it in five years is that trailer.

That makes the recent rumors of Hollywood interest even more ironic. If some producer in California is really interested in an adaptation they should bypass Techland and find out who created the trailer at Axis--in other words, don't talk to the game guys, talk to the people that make movies instead. Consider that Axis also did the wonderful opening animation for Mass Effect 2 and that nothing in the rest game was as eerily beautiful as the 60 seconds which opened it.
Posted by megafauna at 5:20 AM

Six days and counting until the release of Trivia Golf on bigfish.com.
Posted by megafauna at 7:39 PM 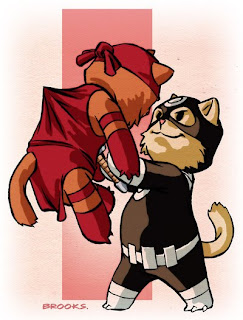 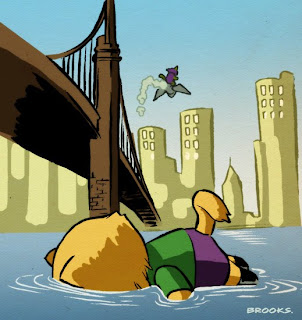 Horrifying and cute.
Posted by megafauna at 7:49 PM

Game companies should not have programmers

Use somebody else's engine. Game companies and their employees should be focused on building content: writing, graphics, sound effects, music, level design, etc. At the end of the day nobody who played Call of Duty said to themselves "That rendered much more smoothly than Medal of Honor".

What sells games is content. What's important is shooting a bunch of civilians in a Russian airport, not how many civilians the game engine could render--as long as it's comparable to the competition's civilian killing rendering engine.

I came to this realization while writing my own input pipeline for an Android proof of concept. After hours of tearing my hair out over a performance issue I finally found the relevant issue described on a blog. After a short exchange of pleasantries with the author I had my solution--but it was his solution. I was solving a problem that somebody else had already figured out, and all that effort wasn't going to sell one additional copy of our game.
Posted by megafauna at 5:23 PM

I just got this in my new inbox:

Welcome to Xxxxx Mr. Xxxxx. I am sure your stay with us will be productive and exciting.

I remind you that we have a strict anti-harassment policy. You already have one instance in your file. I must of course protect the accuser's identity, but the complaint is "Walks around with no pants". Please be concious of how you dress, for while we have a fairly loose dress code, it does include "must wear pants".

Have a great day,


The man is keeping me down.
Posted by megafauna at 10:15 PM

United just started a new policy of automatically requesting upgrades for elite members on domestic flights, which is immensely useful for someone like me who otherwise wouldn't bother. I've been bumped up to the first class cabin two times in a row now since the new policy kicked in, and there's a good chance that I'll continue to get upgrades as long as I pick and choose my times to avoid the heavily traveled flights.

That first class ticket also gets you into the first class security line, by the way, so you don't have to mix with the proles.

Which brings me to the much maligned CRJ's. They have a bad rep since the seats are smaller and standard sized roller boards won't fit in the overhead bin. Luckily, I'm not a giant lard ass and since I fly regional all the time I didn't buy a roller board'. Since everybody else is gate checking their carry-on's I usually have plenty of room to stow my bags overhead, including the one that's supposed to go under the seat.
Posted by megafauna at 7:40 PM

Because if you belong to the former category you're likely to be a little puzzled by the praises being sung for the writing in games like Mass Effect 2 and Heavy Rain. Destructoid nailed it in their review for Heavy Rain: "Less demanding players may be tricked into thinking the game is telling a brilliant story simply because it's not telling the kind of story that gamers are used to seeing, but make no mistake: its naive conclusions and impossibly weak characters would get Heavy Rain laughed out of any serious film festival. " Translation: just because it's new to you doesn't mean that holds true for everyone outside of your parents' basement.

For the record I'm playing Mass Effect 2 now and enjoying it, but I've long since developed a protective reflex that allows me to play games with "stories": whenever I hit any really terrible acting or writing I just ignore it until I can get back to blowing stuff up real good. Much like a nictitating membrane this reflex protects the soft tissues of my brain from the permanent damage that might result from the "dialogue" one could be exposed to in video games. It's served me well and only failed occasionally--most notably for the last Oblivion game where Patrick Stewart mumbled some garbage so insane that I was convinced that whoever was chasing the crazy old bat was doing so with the intention of putting him in a nursing home.

So while I enjoy Mass Effect 2 I don't delude myself about its shortcomings. For instance, whoever provides the voice acting for the main character (Shepard) gives such a wooden reading that I'm always tempted to charge the enemy in firefights to see if they can put down the living dead. And many of the game's heralded elements only serve to demonstrate just how far video gaming as a genre has to go before it can catch up with classics like, say, "The Dukes of Hazard" or Jim Varney's "Ernest" movies. Take, for example, the so called "romances". Movie critics debate things like chemistry when it comes to two actors, video game writers are apparently still trying to figure out how to write dialogue that even comes close to convincing you that two characters might actually sort of, kind of like each other. I decided to romance Jack (aka Subject Zero) because I wanted to see if Shepard would break out a condom before bedding the crazy, drug addled bitch. That would be the only safe thing to do. That and stock up on hepatitis vaccine. Needless to say I found their interaction to be unconvincing. Shepard spends the game telling her to stay off drugs and get her high school diploma and for some reason she decides he's the best thing since sliced bread. He sounds like a high school guidance counselor, for Christ's sake, the kind of person you would imagine a character like Jack would ignore while she was shooting up on heroin. Even I hated him so much after his preachy, white bread sermons that I would run him into the enemy in the next firefight so that they could turn him into swiss cheese. But did he ever learn? Noooooo. I mean, I happen to know tattooed, violent women in real life and as far as I'm concerned the more likely result would be an ice pick to the brain rather than any kissy face.
Posted by megafauna at 4:05 PM

Scotland and the Lockerbie bomber

I'm going to a box karaoke bar this weekend and I needed to brush up on my repertoire. Couldn't find any decent phonetic transcriptions of "Linda Linda" by the Blue Hearts so I drew this up.

Media gets it all wrong on Clinton

Bill Clinton had nothing to do with the release of captured journalists Laura Ling and Euna Lee. George Bush Jr. or Sr. could have done. Jimmy Carter could have done it. Ronald Reagan or Gerald Ford could have done it if either one was still alive. The only requirement was that somebody with the stature of an ex-president visit N. Korea and treat with Kim Jong Il. Once on the ground Clinton and Kim could have talked about golf, the virtues of the Big Mac or whatever else they wanted to for 30 minutes and it wouldn't have had any effect on the end result.

The North Korean regime is playing the game of international diplomacy. Anybody with half a brain and any knowledge of how these things work would have predicted that the N. Koreans would give up Ling and Lee given the proper payoff. The payoff here was an ex-president and with him the inevitable suggestion of legitimacy.
Posted by megafauna at 10:31 PM

The weekend box office gross was lower than expected. There are reports of audiences walking out on the movie. And now the screen writer is begging fanboys to go see the movie again this weekend.

Alan Moore said that the comic book was unfilmable, and maybe he was right. What happens when you take a great comic book and slavishly transcribe it to film? You get a great comic book and a mediocre movie. The common complaint among the critics is that the movie is so faithful to the source material that it's embalmed. One of the great joys of the comic book was that it made no attempt to explain itself to the reader--instead it deliberately confused you and gradually revealed itself over the course of 12 issues. Compressing that into a movie, even one with a running time of three hours, is probably impossible.

I've always argued that there's no point in releasing a cover for a song if it sounds exactly like the original. What's the point?
Posted by megafauna at 2:05 PM